The Superintendent’s August 27, 2021 newsletter proudly announces that the district’s core values and mission have been updated and the announcment of a Strategic Plan that will equalize equity and “Unpack Diversity Equity and Inclusion (DEI) Audit and use the data to inform decisions.”

...The Think Tank updated the Current State Report with a COVID Epilogue and identified natural intersections with the diversity, equity and inclusion work happening in the district.

The Task Force also added the final report to their web page, which resembles what was described in the What Is DEI? page when this initiative was announced last year.

Two recommendations in the report are to hire a DEI Director and appoint liaisons in each school:

Academy District 20 establishes a Director of Equity and Diversity position to hold the district accountable to a set of district-wide policies.

Each school will have one designated DEI liaison to work with and be supported by the district Director of Equity and Diversity (per district recommendation #7), to coordinate DEI efforts at that school and address equity issues as needed.

The district’s “data” is dubious and misrepresented. Predictably, it’s selected and presented for the narrative. Some former members of the DEI task force affirmed this in the May 20th board meeting, though none of their comments are featured on the task force’s final report. According to the “data” in the report, the Task Force doesn’t even hold themselves to their own standards. 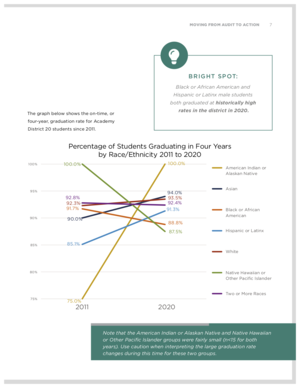 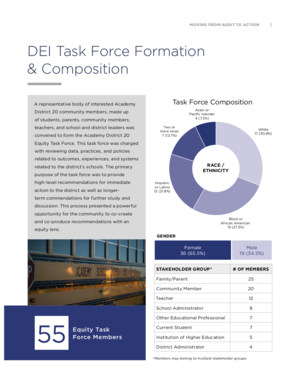 What is this graph supposed to demonstrate? The caption in the report says to “use caution” when viewing two populations due to lower populations.

It also appears the district is now using the new gender-neutral word ‘Latinx’ in official publications. 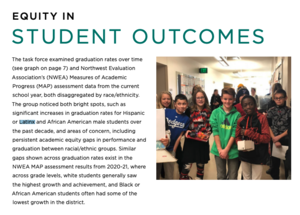 To be fair, not all of the recommendations are absurd. In fact, many are generally and historically agreeable even without a DEI initiative.

View The Final Report from the Task Force.

There was a board meeting on August 19th, though the DEI effort wasn’t specifically discussed.

This woke agenda continues to advance without school board questioning or checks on the administration, without the consent or full awareness of the district community while concealed under trite and vague statements. Tom Gregory has embarked on a social transformation in our community as if they have a mandate or consensual authority.

There are two vacant school board seats this year. Karin Reynolds and Doug Lundberg are not seeking re-election.